Things Game Developers Must Take Into Account to Improve Functionality

Things Game Developers Must Take Into Account to Improve Functionality 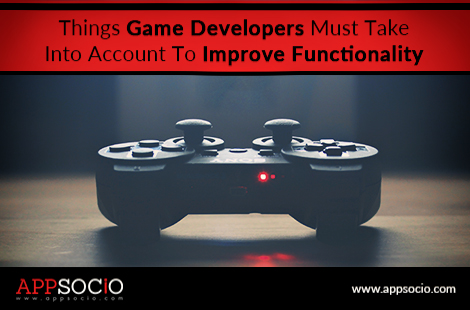 There are two things that every game developer must learn before entering into the industry; first, you must be capable of luring your audience to buy the game by providing them the compelling experience, and second is to maintain the game’s fame through regular updates and upgrades. On average, every week the mobile gaming market braces at least ten new games but surprisingly only one or two of them are worth their hype. In the field of gaming, an instant hit is not the scale on which success is measured instead it is the durability that how long a gamer has remained glued and addicted to your game that defines success. Boredom and frustration are two reasons why the audience leaves games earlier than the developer’s expectations to do so. Here are few things mobile game development companies must consider to make their games better and keep their fans in the zone.

The biggest letdown for the gamers is the annoying intro of the game. The developers think that they are providing an insight into the game through their intro but the players see it as a time-wasting aspect, and they want the game to begin as soon as possible. In most cases, it is the first impression that is counted as the last, so give your audience a reason to stay else they would not mind switching to the games with basic intros. Keep your intros small, and you are on the right track to be successful.

Small Sessions in the Game:

Ask a 5-year old, and he will tell you that he does not have TIME for many things. It merely suggests that people do not have enough time to invest in the games with long sessions and levels. It is a no-brainer to understand that all the renowned games demand you to invest time to be the master of them but things have changed, and now these games are not fan-favorites anymore. Online game developers should design their games as per the audience’s demand and their profitability is imminent, check cohensecurity.com.

The sad thing about most games is that bugs are still plaguing them. We would see the mobile OS platforms emphasizing the developers to produce quality over quantity, but none of the developers are batting an eye to it. What bugs do in the games is that they kill the smoothness, making the gamer agitated and as a result, they do not give a second thought and deletes the game instantly. So, it is highly recommended to all the pros and beginners to run various tests for your games before introducing them to the market.

The gamers leave the game halfway through just because they get stuck on a particular level. It would be a sensible move for a developer to avoid a sudden rise in difficulties for the levels as no one would bother to invest extra time in overcoming the challenges. Design your games in a smooth flow so the gamers can be entertained instead of getting annoyed.

App Socio has a variety of game developers that can help you in enhancing your design and development areas through consultancy and professional approaches towards their development.