Native, Web, & Hybrid Apps; Which One Should You Prefer 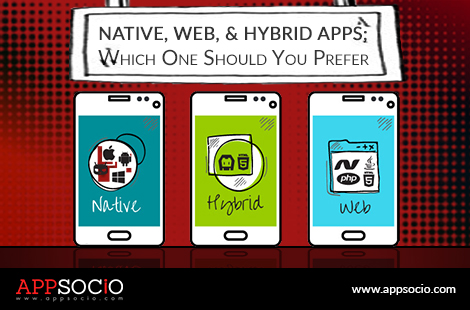 It is necessary for all of us to understand the differences among the different types of apps as the misconceptions can lead to horrible disasters. If you are entering the development sector without evaluating the pros and cons concerning each category of the apps, then believe us that you are in for some serious trouble. You do not need to be an Einstein to figure out the right choice once you are provided with the comparison between the categories and hence, we decided to draw some parallels that can be really helpful.

Native Apps are the ones which are developed for the particular devices. The Android Apps are usually written in Java, while the iOS apps are written in Objective-C. If you are busy guessing the reasons why these native apps are so popular among the masses, then you must know that these types of apps are considered to be the fastest and most reliable apps among all the categories. However, if you see the development process as a whole, you will find that the developing time of these apps is much slower than the other ones while the budget cost is also on a higher side. Graphical and speed performance of these applications have no match and the interaction with OS features like Camera, Microphone, Contact List and Push notifications is also sleek. The maintenance cost might baffle you, but considering the functionality, investment in native apps would be a sensible move. Get info on netti casino kolik kopelit.

The type of category which is basically a website having interactivity similar to a mobile app. These are the types that are written in either JavaScript or HTML5 and support various browsers such as Mozilla Firefox or Safari. The budget cost for developing these applications is quite low, same goes for the maintenance cost while the functionality is moderate; not too high neither too low. Graphical and application processing speed is less than the native apps, but considering the investment one is going to make, it is more than acceptable. The development time is the fastest among all the other types, and it interacts well with all the OS features, bar contacts, and push notifications.

The Hybrid apps involve the elements from both native and web apps. In short, you can say that the Hybrid Apps are the perfect blend of these two applications. The Hybrid Apps can be distributed through the App Store similar to Native Apps, while they are also compatible with different web browsers. They take a reasonable time to develop (less than Native Apps) while the cost to develop them is also on a lower side. Check maidsofjacksonville.com. It’s a single base platform on which developers can incorporate multiple functionalities by introducing different features for different types. It is the user’s browser that is going to define the processing speed of a Hybrid App and therefore it is evident that they cannot match the speed functionality of Native Apps. The apps interact with all the OS features even when they have the high-performance requirements.

Categorically, it is understandable that the app developers who have the budget and time to establish app development business should go for native apps as it returns the best value for money due to its popularity. The developers who do not have an expanded market as yet should stick to web apps as it is the safest investment when your resources are limited. Those developers who want to incorporate multiple features and have moderate resources and time should go for Hybrid Apps as they support all the features without demanding expensive tools. App Socio is a great platform through which you can deploy developers that have expertise in all the categories to get you that perfect app for your brand and business.