Has Nokia Managed To Rejuvenate Itself With Its Latest Android Phone?

Has Nokia Managed To Rejuvenate Itself With Its Latest Android Phone? 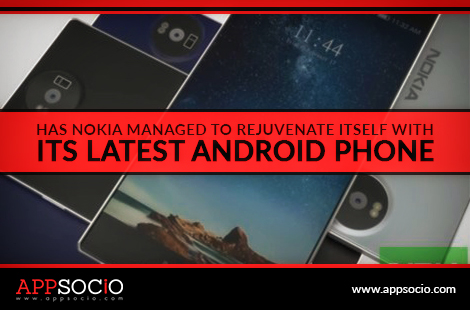 In the world of iPhones, Galaxies, Xperias, we all forget that there is a legendary brand called Nokia. No denying the fact that Nokia lost its swagger and charisma ever since the arrival of all these giants of the game, but as they say, one should never underestimate the potential of a legendary brand or a person. Nokia 8 and Nokia 9 have the potential to compete against other renowned smartphone brands. Nokia has now decided to hit the market with the latest Android OS (Nougat; 7.1.2) which provides an excellent platform for top android app developers to improvise and expand their expertise. We are confident that Nokia has finally hit the sweet spot by introducing a smartphone as good as the other competitors, and therefore we decided to overview the phone for our audiences.

The brand was known for producing phones as solid as an iron bar (yes we mean Nokia 3310) but now the company has realized that the design of a phone should be according to the latest trends i-e light and delicate. It is rumored that the latest smartphone will have an all-glass design and the users will have the luxury of an ultra-premium phone in the shape of the Nokia 9. Check painterly. ie. If the rumors are to be believed, then we pretty much believe that Apple and Samsung now have a new, fierce competitor in the market.

The company is aware that this phone could be their last throw of the dice to restore their reputation and hence they are going all-in to re-establish themselves as a formidable force. As per the latest news, the Nokia 9 is going to have an astonishing 5.5-inch QHD (1440×2560 pixels) OLED display powered by a Qualcomm Snapdragon 835. The phone as per the description looks insane and most importantly it looks remarkably thin and delicate too.

Who would be foolish enough to buy a DSLR when they can have a phone having a Carl Zeiss 24mp rear camera and a 12mp front camera? The company was smart enough to realize that the worth of a phone is judged by its camera these days, and hence they provided the users with what they want the http://bästa-bredband.se/, exactly. Moreover, to add ease to your hangouts and social activities, the new Nokia 9 will have a 3800mAh battery which simply means that the power banks would become a mere formality in your starter pack.

We do expect the new device will have a Quad-Core Processor Adreno 540 GPU, 64/128 GB storage, and 6 GB RAM to run smoothly with the latest Android version (Nougat 7.1.2). We further believe that the users will have the simplest interface and problems like the phone getting stuck or slowed down due to the excessive use of applications would not happen. The word in the air is that all Android development Companies are also looking to utilize this phone’s potential to their advantage, and it could well take them a step ahead of the iOS market.

Our Android experts at App Socio, with all their experience, believe that Nokia 9 could be a real game-changer in the business and it will also help Nokia to restore its reputation.