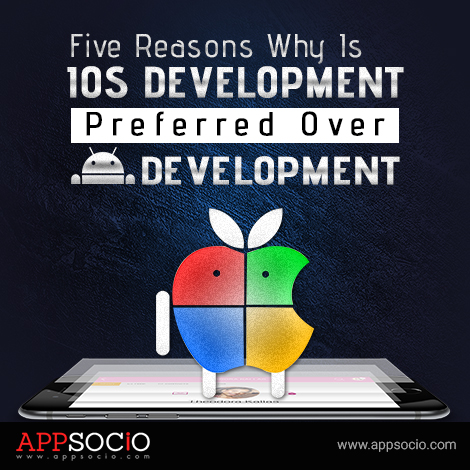 Multiple platforms power our mobile devices, and it becomes confusing for a developer to target one of them. The companies with access to various resources can afford to invest in multiple platforms simultaneously, while the beginners (with fewer resources) have to stick with one platform. Now what is critical for beginners is to choose the operating system which determines their success or failure. The general perception of the operating systems is that the iOS market is head and shoulders above the Android market and hence it becomes quite apparent that developers prefer iOS over Android. It is not just the market competency that compels them to choose iOS development, but there are few other reasons, and five of them are highlighted below.

It is the variety of applications that defines the success of the developers, and currently, iOS apps are hot commodities that have the upper hand over Android. Almost every developer prefers to kick-start their career with iOS since all the great content authors introduce new applications through iOS and keep the Android development for later stages. The prime example of this scenario is Twitter where Vine and Twitter music was published through iOS, initially. Check this automotive webbing

It’s understood that whichever platform will generate more revenue automatically has more fans. The market of iOS is potentially more concrete and stable as compared to Android which provides the opportunity to developers to set their priorities right. Roughly estimated, the developers get 50% more through the App Store when compared to what they would get from the Play Store.

What makes Apple a famous company is its policy to authorize their employee the freedom to express their ideas. The reason why an iOS developer has a better learning experience than an Android developer is the fact that he does not have to follow the same old pattern which others are following. He is authorized to produce something more creative, and hence his work becomes interesting which amplifies professional learning.

If you choose the best available developer in the world and do not provide him the tools to develop an app, you would be foolish to expect results. When the sharpness of a developer meets with adequate tools; that is when the top apps are developed. In this particular area, iOS has no completion whatsoever, and it is also evident that they would not be facing any competition anytime soon, click here to find more. The reason why developers prefer iOS is the variety of tools they have at their disposal which makes their work efficient and easy to deliver.

The iOS is dominating the market for a good decade now, and it seems inevitable they will continue doing it for the foreseeable future. One could easily say that Apple users are always more dedicated than the other platform users, which makes it easy for the developer to make their decision. The acknowledgment and appreciation of work compel the developers to prefer iOS over any other platform.

If you require any help from expert iOS App Development Company, App Socio is the place where you need to be.