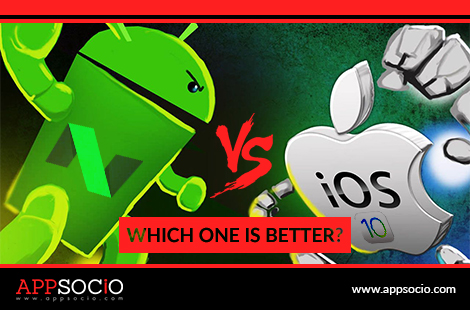 Regardless of millions of arguments, opinions, and comparisons, some rivalries like Coke-Pepsi, Manchester United-Liverpool, USA and Russia, and Android-iOS will always remain unsettled. All these competitors have been a major threat to each other, and things do not seem to change anytime soon. For example, Apple released iOS 10 a few months ago, and everyone thought that they are going to better Android by a country mile. However, Android Development recently took a new turn, and they released their new OS Nougat 7.0 to make things even, again. Here is a little toe-toe comparison between the two latest operating systems of the mobile world.

When it is about switching between the apps, iOS was comprehensively winning the battle until Nougat arrived. The multi-window feature is a part of android for a good 3, 4 years but Android users were always found complaining about the slowness while switching the apps. To address this issue, the upgraded Nougat 7.0 now lets you open two apps simultaneously through multi-screen for all the devices whereas Apple has still limited this feature for their tablets only. So, the issue of switching apps has been solved by an Android developer, and it also makes Nougat a clear winner over iOS 10.

Talking about the interface, navigation is the only difference between the two rivals. In iOS, users are limited to a home button to go back to the home screen whereas, in Android, users have the luxury of soft navigation buttons which appear when you tap on the screen. The pleasant thing about these soft navigation buttons is that whenever you are running an app in full screen, you can go back to the previous screen by pressing the back button every time. Contrary to that, iOS provide you the ‘back-to-screen- option in only a few apps, and hence the home button remains the only option to return. Furthermore, iOS 10 bounds you to keep your apps on the home screen while in Nougat; you can shift apps to the app tray so you can keep your home screen free of additional apps.

Android app development services are acutely aware that they are an easy target for malware writers as compared to iOS. The only way Android users can tackle viruses is by installing anti-virus apps available on the play store. Moreover, it is better to be cautious while installing apps outside the play store as they make things easier for hackers. Nougat 7.0 has released major security updates, but still, iOS 10 has a slight edge over 7.0 regarding security.  There is no denying that iOS mitigates the security threats, but it is the cautious approach of the user that can make Nougat as safe as iOS 10.

As said earlier, it is never an easy call to announce a clear winner between the two. However, as it stands, Nougat has a slight edge over iOS 10 just because the latest developments in the Android world have addressed all the issues that the users were facing for a long time. App Socio deals in the development of both the iOS and Android apps and you can get in touch with them for your business’s brand image enhancement.